Today I have a review of Body on Baker Street by Vicki Delany, the second book in the Sherlock Holmes Bookshop mystery series. 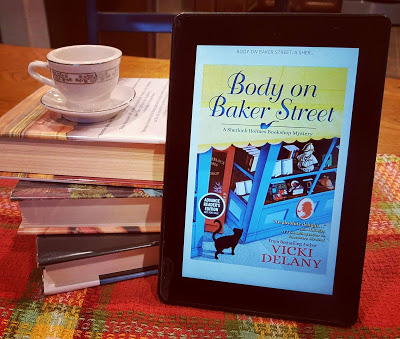 Gemma Doyle and Jayne Wilson are busy managing the Sherlock Holmes Bookshop and Emporium on Baker Street and adjoining Mrs. Hudson’s Tea Room in anticipation of the store’s upcoming book signing with the illustrious Renalta Van Markoff, author of the controversial Hudson and Holmes mystery series. But during the author Q&A session, dedicated Sherlockian Donald Morris verbally attacks Renalta and her series for disgracing Sherlock’s legacy, only to be publicly humiliated when the author triumphantly lashes back and gains the upper hand. That is until Renalta collapses on the table―dead.Donald insists he didn’t do it and pleads to his friends to clear his name. Fortunately, Gemma and Jayne have no shortage of suspects between the author’s bullied personal assistant, her frustrated publicist, the hapless publisher, a handsome rare book dealer, an obsessively rabid fan, and a world of other Sherlock enthusiasts with strong objections to Renalta’s depiction of the Great Detective. It’s up to the shrewd sleuthing duo to eliminate the impossible and deduce the truth before the West London police arrest an innocent man. 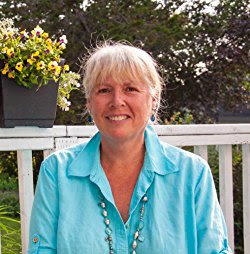 Vicki Delany is one of Canada’s most prolific and varied crime writers and a national bestseller in the U.S. She has written more than twenty-five books:  clever cozies to Gothic thrillers to gritty police procedurals to historical fiction and novellas for adult literacy. Under the name of Eva Gates, she writes the Lighthouse Library cozy series for Penguin Random House. Her latest book is Body on Baker Street, the second in the Sherlock Holmes Bookshop series from Crooked Lane.
Vicki is the past president of the Crime Writers of Canada.  Her work has been nominated for the Derringer, the Bony Blithe, the Ontario Library Association Golden Oak, and the Arthur Ellis Awards.

I am a huge sucker for cozy mysteries that involve books in any way, so when the opportunity presented itself to read this one, I jumped! I just love these niche settings and the Sherlock Holmes Bookshop and Emporium did not disappoint!  While I had not read the first book prior to picking this one up, there was never a feeling that I was missing something and this could very well be read as a stand-alone.

The story is very fast-paced making it the perfect choice for a weekend read or a quick escape from reality. This entertaining cast of characters are well-developed and just quirky enough to keep you guessing until the very end as to who the culprit really is. With so many fans of Sherlock Holmes around, it was fun to read all the interesting tidbits and random facts about the character and the author, Sir Conan Arthur Doyle.  As someone who also has an antagonistic relationship with their own cat, I enjoyed the humorous relationship between Gemma and Moriarty the bookstore cat.

If you’ve read enough cozy mysteries then you are well aware that the amateur sleuth is always butting heads with a questionable if not highly incompetent law enforcement team.  While many may see Gemma as obnoxious and even arrogant in regards to her investigation skills, I really enjoyed Gemma’s character and liked to think that her attitude was a reflection of that knowledge that the detectives charged with finding out the truth were ultimately going to mess up anyway. She may not be able to solve cases in an official capacity, but she does own a Sherlock Holmes bookstore and that accounts for something!

Sarcasm aside, this was a delightful and well written cozy mystery that I look forward to continuing on with.  In fact, it was through putting this post together that I became aware that the author also writes the Lighthouse Library series, which is currently on my shelf! This was definitely a cut above the many cozy mysteries I have read before and highly recommended if you’re a fan of bookish cozies.

Enter for your chance to win a print copy of Body on Baker Street!

Thanks again to Great Escapes Book Tours, Vicki Delany, and Crooked Lane Books!  It was a pleasure providing a review.

You can check out other blogs on the tour HERE.