Today I have a BOOK REVIEW for BODY OF THE CRIME, the first book in the Chip Palmer mystery series, featuring a forensic scientist. Author Jennifer Chase has also graciously provided a GUEST POST discussing how investigators can determine whether a crime scene has been staged! 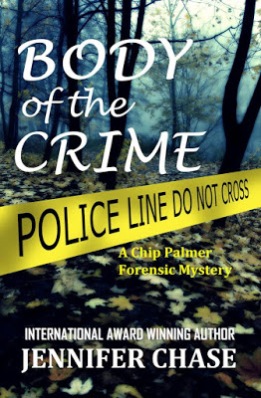 From the multi award-winning author of the Emily Stone Thriller Series, comes a new kind of forensic hero:Three grisly murders linked to five old cold cases, dubbed the Flower Girl Murders, pushes detectives to their limit to find a clever and extremely brutal serial killer, leaving a California town demanding justice. The District Attorney’s Serial Special Task Force retains the help of the reclusive Dr. Chip Palmer, a forensic expert and criminal profiler, to steer them in the right direction. Palmer is known for his astute academic interpretations of serial and predatory crimes, along with his unconventional tactics that goes against general police procedures. He is partnered with the tough and beautiful D.A. Inspector Kate Rawlins, a homicide detective transplanted from Phoenix, and the chemistry ignites between the team–both good and deadly.The Flower Girl Murders leaves three homicides, five cold cases, two seasoned detectives, three suspects, and one serial killer calling all the shots. The investigation must rely on one eccentric forensic scientist to unravel the clues to solve the case. But at what cost?

I HATED THE CURIOUS AND often skeptical looks, which came from the audience in the gallery. I gently eased my body into the chair and faced them directly. It felt more like I was a participating target in a firing squad than a courtroom proceeding.
Shifting from side to side in the cushioned seat, I fidgeted with my tie. It was the only thing I could do under the circumstances.
I waited patiently trying not to nervously tap my fingers.
At least the chair was comfortable as I rested my forearms and hands on the armrest. It was not easy to avoid looking at the two burly sheriff deputy bailiffs stationed at the back corners of the room. They watched everyone with an extreme somber, statue-like presence. I was not even sure if they actually blinked or not.
All eyes in the courtroom fixated on me.
The room fell into complete silence. The audience readied themselves waiting for the show to begin. At least that was what I had imagined in my own mind.
I realized when the prosecutor had finally called my name to testify and the bailiff escorted me into the courtroom that I had forgotten to change my shoes. Dirt and mud had affixed deep into the crevices of the heavy-duty rubber soles, which donated little chunks of dried soil as I walked from the back of the courtroom to the witness area. There were little piles of mountain soil left behind with every stride. It looked like I had stolen shoes from a homeless person.
It was only yesterday that I had taken an extra-long walk down a wooded path that was barely passable even for the native wildlife, but I did not let the rugged terrain scare me out of adding another specimen to my collection of California sediment. In the process, my shoes sunk deep into the mud. At one point my foot had slipped from the left shoe and then plunged my sock-clad foot directly into the sticky muck.
I was all too aware of how disheveled I looked only two months before my fortieth birthday. It was not appealing. My appearance did not give the impression that I was an expert at anything, but somehow I managed to muddle through with an air of authority.
Crime scenes never lied, and it was my job to explain the scientific facts to the non-scientific community; but in the end, it was up to the jury to make the right choice of guilt or innocence. Twelve good people ultimately shouldered the justice burden, and I was just the messenger of facts—good or bad.

I received a copy of this book for free in exchange for an honest and thoughtful review.
If you’ve been reading my blog for even a minute, you are well aware that I love reading serial killer stories, so when I heard about this book, I had to read it! Plus, I recently read and reviewed the author’s latest book in her Emily Stone thriller series and absolutely LOVED it, so I had some pretty high expectations for this one. You can check out my review of Dead Cold HERE.

Within this book, there were multiple antagonists, points of view, and storylines that certainly added layers to the story; however, at times, it was more a case of too much going on that took attention away from the serial killer and understanding his motivations and triggers. While there was plenty of action and drama throughout, toning down some of those aspects would have perhaps heightened the suspense towards topics better served for future installments in the series.

But personal preference aside, Chip and Kate’s strong personalities and dedication to service in solving these crimes creates a fast-paced and intriguing story. I am such a fan of how the author uses her experience in criminology to craft compelling cases and characters from both the investigative and criminal sides. While I would have liked to read more from the killer’s perspective, the story did provide many great examples of how forensics and profiling work, making it a satisfying read for any fan of true crime or crime thrillers. I’ll definitely be on the look out for the next book in what has the potential to be quite a riveting series!

When is a Crime Scene Staged?

For anyone who loves writing murder mysteries or reading them. Have you ever wondered when is a crime scene staged? There are many reasons.

The most difficult task is to recognize some of the subtle appearances to indicate that a crime scene has been staged. Fires are an example of a type of potential staged crime scene; it’s usually to cover up a previous crime that had been committed such as murder or insurance purposes for profit.
Every detective or forensic investigator must use their own subjective skills along with experience to determine if a crime scene has been staged. It’s important to preserve all evidence and document everything in proper order. Notes, sketches, and photographs are extremely helpful to help determine staged crime scenes.
These signs from burglary and/or homicide investigations should alert detectives that something is potentially suspicious:
Points of Entry
This is the most common staged crime scene element, usually an open or broken window.  Examine these areas closely and determine whether or not it’s plausible or if there are other trace evidence such as blood, fingerprints, broken glass, etc.
Weapons Left or Removed
A firearm is the most common staged crime scene weapon. Was this weapon left initially? Did it cause the injury? What’s its purpose?
Movement of Body
One of the least common staged elements is the movement of the body to a secondary crime scene. Examine the clothing, shoes, bloodstains, and hair of the victim to determine if the body has been moved and why. Rigor mortis (stiffening of joints), livor mortis (pooling of blood), blood and trace evidence, along with any type of drag marks can help assist the investigator to determine if the body has been moved. 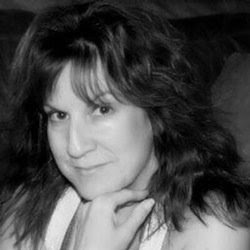 Jennifer Chase is a multi award-winning crime fiction author and consulting criminologist. Jennifer holds a bachelor degree in police forensics and a master’s degree in criminology and criminal justice. These academic pursuits developed out of her curiosity about the criminal mind as well as from her own experience with a violent sociopath, providing Jennifer with deep personal investment in every story she tells. In addition, she holds certifications in serial crime and criminal profiling. She is an affiliate member of the International Association of Forensic Criminologists.

Many thanks to Pump Up Your Book and Jennifer Chase! It was an absolute pleasure reading, reviewing, and hosting. And be sure to check out the other stops on the BLOG TOUR for more opinions and author extras!