Is it better to have loved and lost, then never to have loved?
When Earl’s bride Morgan vanishes in the Smoky Mountains on their honeymoon, the former Navy SEAL is certain she’s been abducted. The park rangers disagree, and after a storm washes away any potential evidence, they call off the official search. Then another man loses his daughter in the same area. Can one last lead help Earl find Morgan before he loses her forever?
WATCH THE BOOK TRAILER

I received a copy of this book for free in exchange for an honest and thoughtful review.
Given the synopsis, I entered into this story with a tense feeling that ultimately never seemed to loosen its grip! This was such a riveting read, especially once the mystery of why Earl’s wife went missing in the first page. I’ll admit that I realized early on what was coming given an early interaction between characters, but I was not disappointed in how the story played out nor in its conclusion. Short, fast-paced chapters kept the tension mounting until the very end and certainly packed a dynamic punch for such a small package!


“If it saddens you to look back, and you’re afraid to look forward, just look beside you, and I’ll be there.”
Earl’s perseverance is a testament to his strong character and truly embodies the human spirit. Facing mounting suspicion in his wife’s disappearance, but also struggling with his own guilt, Earl is horribly conflicted about whether to give up, move on, or continue with a search that seems to matter very little to the law enforcement officials charged with protecting the community. His emotions are expressed with such vehemence that our own sense of empathy is called upon and we can honestly relate to his circumstances and condition.
“The camaraderie couldn’t be explained…”

As an Army veteran myself, I greatly appreciated the level of authenticity presented throughout the story. The men who comprise the mission team came alive on the page as examples of real life individuals I have known and/or worked with, especially Pharts, who brought some much needed humor for the team to maintain their sanity as they embarked on what could very well be a incredibly dauntless undertaking. The team leader, Stan Kowalski, retired Delta Force, drafted the five-paragraph operation order (OPORD), detailing the situation, intelligence gathered on the enemy, and the plan of execution to ensure that all the subordinates understood and followed the order, which is the exact protocol to follow. I was also impressed that once the team received its orders, they actually went through the process of rehearsing those steps briefed in the plan that they would use to carry out the mission. This is such an integral part of any task undertaken within the military and spoke volumes to the story’s reliability, especially when using such highly specialized components of the armed forces. This also definitely spoke highly in regards to the author’s level of research and the advisers he consulted to create a believable work of fiction that could be enjoyed by a laymen and that provided the representation that service members greatly appreciate seeing reflected across all media formats.

Although this was the second book in the series, it can be read as a true standalone. High expectations have been set for this series and I’m so eager for more!

Bill grew up in the oil and gas refinery town of Phillips in the Texas Panhandle. After graduating from college with a master’s degree, he spent most of his career working for a major insurance company as an agency manager and consultant.

As his retirement was on the horizon, he had an idea about a book. That story, Pepperman’s Promise, became the prequel to The Pepperman Mystery Series, and Perplexity and Panic Point, the next two books in the series, are now available.

Bill and his wife of fifty years live in West Texas. 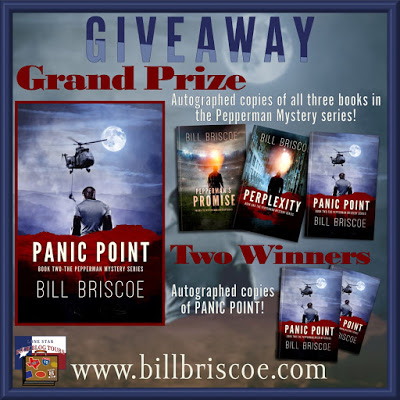 a Rafflecopter giveaway  Best of luck!
Many thanks to Lone Star Book Blog Tours and Bill Briscoe! It was an absolute pleasure reading, reviewing, and hosting! And be sure to check out the other stops on the tour for more opinions and extras!

CHECK OUT THE OTHER GREAT BLOGS ON THE TOUR: