When Jessica, a grieving widow, inherits an antique mall from her mother she also inherits the stallholders, an elderly, amoral, acquisitive, and paranoid collection.

When one of the vendors, a wily ex-con named Roxy, shoots her ex-husband, she calls on Jessica to help bury the body and soon Jessica is embroiled in cover-ups, lies, and misdirection. Into this mix comes Lizzie, Jessica’s late husband’s twelve-year-old daughter by his first marriage, who’s been dumped on Jessica’s doorstep by the child’s self-absorbed mother and it soon becomes apparent that Lizzie is as obsessed with material possessions as Jessica’s elderly tenants.

Why Stuff Matters is a compelling ode to possession, why people like things, and the curious lengths they will go to keep them. Returning to her fictional Caprock, Waldo turns her wry wit on the lives of those afraid to let go.
CLICK TO PURCHASE!
AMAZON     BARNES & NOBLE 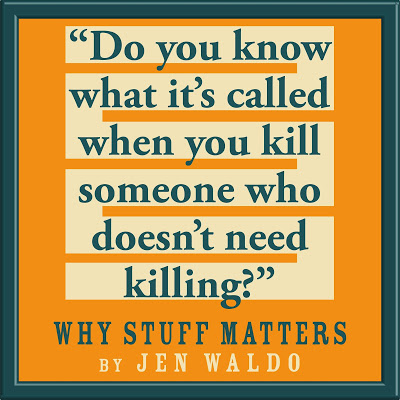 What are some day jobs that you’ve held? Have they impacted your writing?
While being a housewife might be considered old-fashioned, being a housewife in foreign lands is a monumental challenge. Imagine trying to buy groceries in a country where no one speaks your language and there are no grocery stores. Impact my writing? Only in the sense that I became an expert at getting things done!

Do you now or have you ever considered writing under a pen name? Why or why not?
I’m Jenny and I write as Jen. In the beginning my premise was that when someone addressed me as Jen I’d know that this person had to do with my profession and I’d respond accordingly. But these days so many people have read my books that I’m called Jen everywhere I go, so as a distinction it became moot.

What projects are you working on at the present?
I’m finishing my fourth book of the Fran Furlow mystery series. Fran is outspoken, nosey, and self-righteous, but she’s also deeply human and loveable. It’s with a couple of publishers right now and I look forward to seeing her adventures in print.

What does your perfect writing spot look like? Is that your actual writing spot?
Other than the keyboard, I work in an atmosphere of complete sense deprivation. No noise, no people, no music, no light other than the screen. This is perfect for me and easy to achieve at five o’clock in the morning.

How important are names to you in your books? How do you choose names?
The population of the Texas panhandle is primarily composed of British, Irish, Scotts, German, and Latino heritage, so I try to reflect that. When I read a book I become irritated if too many names start with the same letter, which sounds trivial; but my goal is to create a clear and comfortable text, not make some poor soul flip back and forth to see which one’s Karen, Kathy, or Kay.

If you had a superpower, what would it be?
Clear communication. In my life every time a plan goes awry or someone becomes impatient or angry, it’s due to poor communication. Two people absolutely never think alike, less so when more than two are involved. I’d like to be able to communicate clearly with others without hurting feelings or stirring up resentment.

What was the hardest part of writing this book?
Justifying the plot. Who was after Roxy and why? Why did Jess help Roxy bury the dead instead of going to the police? Motives are always subjective and multi-layered and I wanted to present this subtly, leading the reader to believe, yet at the same time, ponder the motives, morality, and state of mind of the individuals involved.

Jen Waldo lived in seven countries over a thirty-year period and has now settled, along with her husband, in Marble Falls, Texas. She first started writing over twenty years ago when, while living in Cairo, she had difficulty locating reading material and realized she’d have to make her own fun. She has since earned an MFA and written a number of novels. Her work has been published in The European and was shortlisted in a competition by Traveler magazine. Old Buildings in North Texas and Why Stuff Matters have been published in the UK by Arcadia Books. Jen’s fiction is set in Northwest Texas and she’s grateful to her hometown of Amarillo for providing colorful characters and a background of relentless whistling wind.

CHECK OUT THE OTHER GREAT BLOGS ON THE TOUR: