A STRANGER IN THE HOUSE
by
Shari Lapena

Karen and Tom Krupp are happy—they’ve got a lovely home in upstate New York, they’re practically newlyweds, and they have no kids to interrupt their comfortable life together. But one day, Tom returns home to find Karen has vanished—her car’s gone and it seems she left in a rush. She even left her purse—complete with phone and ID—behind.

There’s a knock on the door—the police are there to take Tom to the hospital where his wife has been admitted. She had a car accident, and lost control as she sped through the worst part of town.

The accident has left Karen with a concussion and a few scrapes. Still, she’s mostly okay—except that she can’t remember what she was doing or where she was when she crashed. The cops think her memory loss is highly convenient, and they suspect she was up to no good.

Karen returns home with Tom, determined to heal and move on with her life. Then she realizes something’s been moved. Something’s not quite right. Someone’s been in her house. And the police won’t stop asking questions.

Because in this house, everyone’s a stranger. Everyone has something they’d rather keep hidden. Something they might even kill to keep quiet.
CLICK HERE TO PURCHASE ON AMAZON!

While this book was incredibly fast-paced and addictive, I’m just getting slightly tired of the overuse of memory loss as a device to uncover the mystery. Especially given that in the majority of these stories, everything about the couple’s relationship was incredibly perfect and the ideal to others until one day one bad thing happens and everyone begins to question the woman’s sanity and/or honesty. Ugh. One day something new will come along, but today is not that day.

One of the first few reviews I wrote at the beginning of my blog was for Lapena’s debut novel The Couple Next Door (full review here). As with that story, the multiple perspectives greatly enhance the sense of unlikeability you begin to have for these characters. Even the characters that I’m assuming you are supposed to have some empathy for become annoying and even more unlikable. Especially Tom. What a pathetic, suit of a man! No one is actually redeemable and the vast majority of their problems wouldn’t even be an issue if they would just TALK to one another! But they don’t ,and honesty never reigns supreme, so we end up with this convoluted mess! But I do thoroughly enjoy the varied perspectives on the issue, so readers are fully aware of what’s going on, while leaving the characters out in the cold. The suspense is heightened along with the adding some layer to character depth, which can be pretty lacking.

There is no doubt that Lapena can write train wreck thrillers with quite a few twists along the way, so I will still continue keeping an eye out for her future books. I would highly recommend this one for anyone wanting out of a reading slump, but if you’re looking for more of a crime-centered story with depth, you’ll have to look elsewhere. The ending is definitely worth waiting for, and I think I would spend the few bucks on a novella to find out more, but please don’t turn it into a full length sequel! 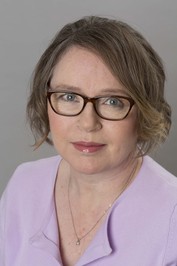 Shari Lapena is the internationally bestselling author of The Couple Next Door. She was a lawyer and an English teacher before turning her hand to fiction. She lives in Toronto.