Today, I am hosting a BOOK REVIEW for WELCOME TO MOONLIGHT HARBOR, the first book in a new series by Sheila Roberts! 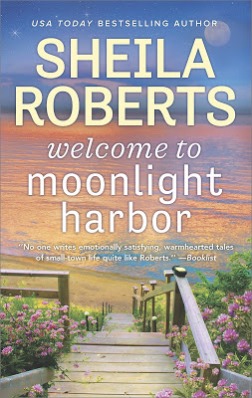 Once happily married, Jenna Jones is about to turn forty, and this year for her birthday—lucky her—she’s getting a divorce. She’s barely able to support herself and her teenage daughter, but now her deadbeat artist ex is hitting her up for spousal support…and then spending it on his “other” woman.

Still, as her mother always says, every storm brings a rainbow. And when she gets a very unexpected gift from her great-aunt Edie, things seem to be taking a turn for the better. Aging Aunt Edie is finding it difficult to keep up her business running The Driftwood Inn, so she invites Jenna to come live with her and run the place. It looks like Jenna’s financial problems are solved!

Or not. The town is a little more run-down than Jenna remembers, but that’s nothing compared to the ramshackle state of The Driftwood Inn. Aunt Edie is confident they can return it to its former glory, though Jenna feels like she’s jumped from the proverbial frying pan into the beach fire

But who knows? With the help of her new friends and a couple of handsome citizens, perhaps that rainbow is on the horizon after all. Because, no matter what, life is always good at the beach.

Featuring all the warmth, romance and trademark humor of Sheila Roberts’s writing, this new series will delight longtime fans and welcome a generation of new readers.

I received a free copy of this book in exchange for an honest and thoughtful review.

This was such a wonderful beginning to a new series! As with her previous series, I was immediately drawn into the story. I absolutely love Roberts’ ability to create such relatable and likeable characters, and just as they do with Jenna, they all welcome you home with loving and open arms! Her writing style and conversational tone are so effortless and lighthearted that everything from the colorful cast of characters to the picturesque setting seems to come alive right off the page. This sweet story about second chances is delightfully engaging, and despite all the stressful and heartbreaking topics, you will be humorously and wholeheartedly entertained throughout!

I really enjoyed that the story primarily followed Jenna as she embarked on this journey to rebuild her life in the town of Moonlight Harbor along the Washington coast. Previous books in the Icicle Falls series showcased the stories of multiple characters in one book, so I thoroughly enjoyed that the focus remained simply on Jenna for this opening installment. I could definitely see the potential for some secondary characters to shine in later books rather than the series continuing with Jenna as the lead. While she has a lot to deal with in order to rebuild her aunt’s motel, Jenna’s drive and determination are inspiring as are the friendships she builds with the other business owners within the community. Tourism is their lifeblood, so it was such a pleasure to read about everyone helping out where they could and supporting and encouraging each other when problems arose. It was almost just as important to everyone else that The Driftwood Inn returned to its former glory!

I always appreciate the subtle romance aspects, which gives this a much more cozy vibe. Jenna opens her heart to a new beginning and finds a few possible paths to pursue along the way because we’re never too old nor is it ever too late to start over.

As much as I enjoyed Icicle Falls, I have to say that I think I’m going to really like coming back to Moonlight Harbor even more! But while I wait, the provided recipes may help to bring a little taste of the shore into my own home. 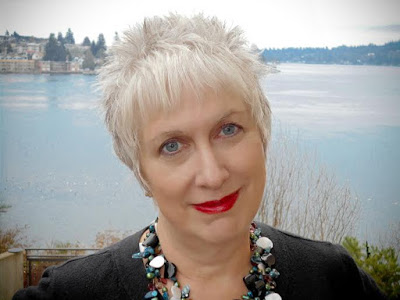 Sheila Roberts lives on the water in the Pacific Northwest. Her books have been printed in several different languages and have been chosen for book clubs such as Doubleday as well as for Readers Digest Condensed books. Her best-selling novel ON STRIKE FOR CHRISTMAS was made into a movie and appeared on the Lifetime Movie Network, and her novel THE NINE LIVES OF CHRISTMAS was made into a movie for the Hallmark Channel.
When she’s not making public appearances or playing with her friends, she can be found writing about those things near and dear to women’s hearts: family, friends, and chocolate.

Many thanks to Pump Up Your Book blog tours and Sheila Roberts! It was an absolute pleasure reading, reviewing, and hosting! Be sure to check out the other stops on the tour for more opinions and extras!

Interview at Sheila’s Guests and Reviews

Book Review at The World As I See It

Book Review at Books for Books

Book Review at Book by Book

Book Featured at Confessions of an Eccentric Bookaholic

Book Featured at The Writer’s Life

Book Review at Reviews by Crystal

Book Review at Stacking My Bookshelves

Book Review at The Book Connection