WHAT LIES BELOW
by
Barbara Taylor Sissel
Genre: Contemporary Mystery / Literary Suspense
Publisher: Lake Union Publishing
Date of Publication: May 15, 2018
Number of Pages: 334
Scroll down for the giveaway! 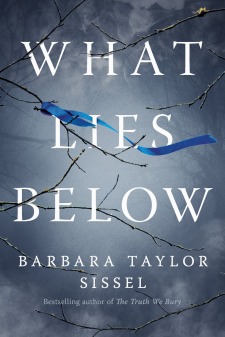 Everyone has nightmares. One woman is living hers.
Gilly O’Connell’s nightmares aren’t just bad dreams; they’re glimpses of terrifying realities to come. Gilly has spent her entire life trying to suppress the foreboding visions. So when a dismissed premonition leads to her husband’s murder, she buries the guilt and pain of the unsolved crime in the only way she knows how—she runs from it. Three years later, after overcoming a battle with addiction and starting over in a small Texas town, Gilly dares to believe the worst is over. That is, until another crime rips her heart open: the abduction of a three-year-old girl. Gilly knows more about it than anyone… She’s dreaming again. Gilly is convinced that if she tells the police she dreamed of the kidnapping before it happened, there’s no way they’ll believe her. But when she finally gets the courage to come forward with what she saw, people don’t see her as crazy—they see her as a suspect. Now, in order to help a desperate single father save his child, Gilly must first clear her own name. But as the nightmares of the past catch up to her, Gilly’s only chance for salvation might be the dreams she’s spent so long trying to ignore.
PRAISE FOR WHAT LIES BELOW:
“Infused with heart-stopping suspense, emotional resonance, and startling imagery, What Lies Below swept me along a river of urgency and dread. Barbara Taylor Sissel effortlessly weaves together prescience, regret, grief, love, and revenge—all wrapped in the mystery of a young girl’s abduction. Beneath the breathless immediacy of the story lie deeper questions: How do we forgive ourselves—and others—for remembered transgressions, and can we ever break free of the past?” — A. J. Banner, #1 Amazon and USA Today bestselling author of The Good Neighbor and The Twilight Wife
“Barbara Taylor Sissel’s What Lies Below is suspense at its finest—heartrending, compelling, and beautifully written. If you’re looking for your next up-all-night read, look no further.” — Jessica Strawser, author of Almost Missed You and Not That I Could Tell
“I cannot emphasize this enough: you must read What Lies Below. Barbara Taylor Sissel manages to combine an unreliable narrator, twisting plot, and well imagined characters to create a world where nothing is as it seems and secrets abound. I had intended to savor the novel’s lovely prose but wound up devouring the book in a day. Simply fantastic.” — Karen McQuestion, bestselling author of Hello Love
CLICK to ORDER
Amazon  │  Barnes and Noble

How has Texas influenced your writing?
I’m originally from the Midwest and moved to Texas when I was a high school sophomore. I’ve always been intrigued by the sense of independence here, the kind of “dare you” swagger. I lived in a part of the state then where some of the biggest oil strikes were made and that influence, the sudden wealth and notoriety, the way it affected folks, was unique. The history of the state, even current history, is so full of “characters.” I’ve drawn deeply on my experience of it.
What did you enjoy most about writing What Lies Below?
The research I did into precognitive dreaming. I’ve always been fascinated by the way dreams can sometimes tell of future events. I’ve had the experience myself. While what I dreamed about was a happy event, I wondered what it must be like if you dream of some event or circumstances where someone is in danger. How do you get anyone to believe you when so many may dismiss the ability as foolish or ridiculous?
Why did you choose to write suspense?
It’s funny, but in a way, the genre chose me. When I set out to write I imagined writing historical fiction. I even had two characters in mind, an idea of a mystery with a bit of a romance. And I did try and write that story, but it kept straying away from the mid-century era I was setting it in to current day, and my male protagonist managed to get himself accused of a crime that landed him in current day prison. The way his wife and child and even his mother-in-law were affected by all of this took over the plot and instead of a historical novel I had a present-day suspense/domestic drama novel. It was out of writing that one, and the following two novels, that I conceived my tagline: At the heart of every crime, there’s a family, someone you love.
What cultural value do you see in storytelling and reading?
This is such a great question! My people were storytellers and story telling along with reading has always been a big part of my life. I feel we learn so much about ourselves through the gift of story. I think fiction enhances our ability to understand ourselves and human nature. I read somewhere, something to the effect, that it has recently been found that fiction even more than nonfiction has the power to change our beliefs. As a kid growing up, stories were my major source for learning. My capacity to remember a story exceeds my ability to retain a dry list of facts. A story with a good moral value is a heftier learning tool than a lecture or a sermon. In raising my own children, we read the same books, then discussed the stories, and through those conversations we learned about each other, shared feelings and opinions, and had debates that would never have happened otherwise. If not for books, conversations with them might have begun with my asking, “What did you do today?” and ended with, “Nothing.” Instead, through reading, we opened a dialogue and illuminated worlds.
How long have you been writing?
My writing journey began when my youngest child went to kindergarten. I don’t like to even say how long ago that was! Maybe prehistoric times! Anyway, I can remember attending my first real critique group, with five other authors who had been working and writing together for much longer, with one page. It was their custom to read their pages (usually 10) aloud and then offer a critique. I was so nervous. Had I any idea then how long the journey would be to a published book, I might have tossed up my hands. But if you love what you do, tossing up one’s hands isn’t an option, and I’m so happy now that I stuck with it. Persistence is key in any endeavor. I learned never to take no for an answer. Instead I used it to challenge myself to do it better, to spur myself on.
What projects are you working on at the present?
I’m finishing a new novel, #10, tentatively titled, NEVER TELL. It’s the story of a forty-something woman who embarks on a search for her father from whom she became estranged as a teenager. As she unravels the mystery of his whereabouts, a dark secret comes to light that will have the power to shatter the lives of two families. Look for it to publish sometime in 2019.
CHECK OUT THE BOOK TRAILER!

Barbara Taylor Sissel writes issue oriented, upmarket women’s fiction that is threaded with elements of suspense and defined by its particular emphasis on how crime affects the family. Born in Honolulu, Hawaii, she was raised in various locations across the US and once lived with her family on the grounds of a first offender prison facility. The experience, interacting with the inmates and staff, provided a unique insight into the inmate’s lives, the circumstances behind the crimes they committed, and the impact on the families that were affected. The bestselling author of nine novels, her stories focus on the family at the heart of the crime. An avid gardener and the mother of two grown sons, Barbara lives in the Texas Hill Country. She’s represented by Barbara Poelle at the Irene Goodman Literary Agency.
You can connect with her on:
WEBSITE | FACEBOOK | BOOKBUB | AMAZON
TWITTER | GOODREADS
GIVEAWAY!  GIVEAWAY!  GIVEAWAY!
MAY 15-24, 2018
(US ONLY) 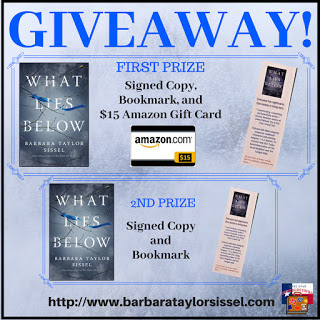 VISIT THE OTHER GREAT BLOGS ON THE TOUR:

1 thought on “AUTHOR INTERVIEW + GIVEAWAY: What Lies Below by Barbara Taylor Sissel (Suspense)”