A Monster Of All Time

Ambitious, attractive, and full of potential, five young college students prepared for the new semester. They dreamed of beginning careers and starting families. They had a lifetime of experiences in front of them. But death came without warning in the dark of the night. Brutally ending five promising lives, leaving behind three gruesome crime scenes, the Gainesville Ripper terrorized the University of Florida, casting an ominous shadow across a frightened college town.

What evil lurked inside him?

What demons drove him to kill?

What made him A Monster of All Time?

The prisoner raged in his lonely cell.
“When they let me out of here,” the prisoner swore to himself, “I’ll make them all pay.”
Years of condemnation and contempt had taken its toll, breaking him down, eroding his spirit, destroying all sense of hope. Now only the anger remained.
~~~~~
Cast into the bowels of Parchman Prison, the notorious Mississippi State Penitentiary, the prisoner had suffered daily torments during his confinement, each day falling deeper and deeper into despair. Raw sewage regularly seeped into his cell through the floor and flowed from a broken drain down the hall, flooding the cramped 8 x 10 feet concrete space with a revolting grey-brown liquid and an unrelenting stench.
Kept in this torturous isolation, his besieged brain had betrayed him, replaying the grievous moments of his life, all of the humiliations and feelings of helplessness, every piercing word, and every raw, painful memory. It was a constant reminder that the world had always been a hurtful place of violence, animosity, and aversion, never one of empathy or understanding.
Desperate to escape the unrelenting torment, he retreated ever deeper into the labyrinth of his own mind, creeping ever closer to madness. It was in that maze of insanity that he found himself. Or rather, something found him.
In the bleak, all-encompassing darkness, something whispered his name.
Faceless and formless, the voice seemed to emanate both from the impenetrable blackness surrounding him and from the shadowy depths of his own consciousness. The voice soothed and seduced him, its language both alien and familiar. It promised the strength to survive whatever nightmares awaited the remainder of his confinement. It offered the tools of revenge for his present condition, for all of the wrongs committed against him in the past, and for the scorn and mistreatment yet to come. Most of all, it promised the power to make others feel the suffering he had so long endured.
Then a name imprinted itself into his brain, uttered from an unseen shape in the darkness, or muttered from the murky depths of memory.
“Gemini,” an eerie voice proclaimed. “I am Gemini.”
At that moment, an infernal compact was crafted, a devil’s contract offering redemption for the damned, a demonic covenant accepted regardless of the terms. Caring nothing for the consequences, the prisoner embraced the assurance of vengeance, pledging revenge for the countless injuries inflicted upon him. Just as a cold, uncaring world had robbed him of his humanity and stolen years of his life, he would take the lives of others in an equal and equitable proportion. A new sense of purpose washed over him, bringing with it a rebirth, a recognition of what he needed to do.
And now he waited, marking the days with hidden malice, the bitter darkness of his cell matched only by the malevolence of his twisted, tainted soul.
***
Excerpt from A Monster Of All Time by J.T. Hunter. Copyright 2018 by J.T. Hunter. Reproduced with permission from J.T. Hunter. All rights reserved. 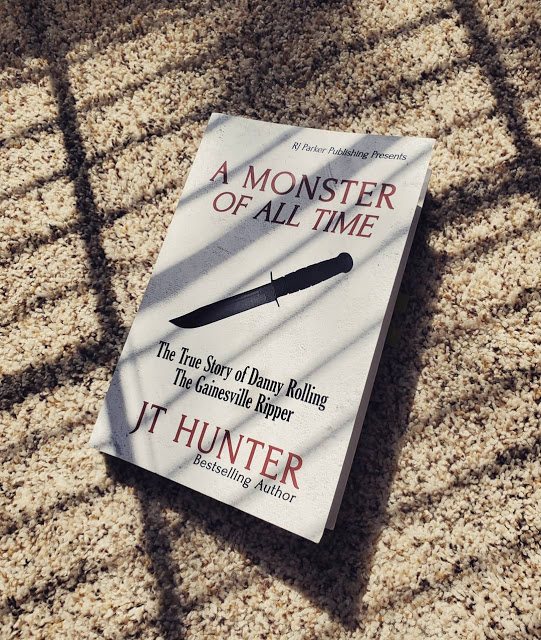 I received a copy of this book for free. This is my honest and thoughtful review.
Having recently finished reading Ann Rule’s THE STRANGER BESIDE ME about serial killer Ted Bundy, I was definitely interested in returning to Florida to learn more about Danny Rolling. As informed as I consider myself to be about serial killers and their crimes, I was surprised that I hadn’t come across Rolling’s name before; however, this book clearly establishes itself as the definitive source on the subject.
“It makes a Stephen King book look like a comic book.”
This is an incredibly well written and riveting account of horribly graphic crimes. The book opens like a piece of fiction, providing a small glimpse into the depraved mind of a cold-blooded killer. Alternating chapters delve into the investigation and Rolling’s background until he is clearly established as the perpetrator. While there is quite a bit of graphic information shared in detailing the brutality these victims suffered through, their individual stories are remarkably told, so that by the end of the book, you feel as though they were a part of your own family and can clearly understand how much this impacted the community and its legacy. The grisly details of these murders are unparalleled and have remained with me long after closing the book.
“As I stared into the execution chamber, I felt his isolation and outsiderness. I didn’t have anything in common with him. Nobody did. It was like he wasn’t human. He was a nobody – a nothing. But everybody knew this nobody’s name. I just wish he had not existed.”
Because Rolling received the death penalty, the story segues into the further emotional upheaval the families went through waiting for his appeals to conclude. Whether you agree with the death penalty or not, the author presents everything in a such an objective and non-judgmental way. There is clear empathy for the families, while also a closing sense that Rolling had accepted his fate.
The additional layer of a false suspect, Ed Humphrey, provided a compelling example of how quickly assumptions can be made that create a lifelong sentence for the wrongly accused.
Highly recommended as a must read for fans of true crime! His unbiased perspective and graceful treatment of the victims and their families certainly has me looking forward to reading more from the author’s backlist.

J.T. Hunter is an attorney with over fourteen years of experience practicing law, including criminal law and appeals, and he has significant training in criminal investigation techniques. He is also a college professor in Florida where his teaching interests focus on the intersection of criminal psychology, law, and literature.

Catch Up With J.T. Hunter On:
jthunter.org, Goodreads, BookBub, & Facebook!

Visit these other great hosts on this tour for more great reviews, interviews, guest posts, and giveaways!

This is a rafflecopter giveaway hosted by Partners in Crime Virtual Book Tours for JT Hunter. There will be 2 winners of one (1) Amazon.com Gift Card each. The giveaway begins on July 1, 2019 and runs through August 2, 2019. Void where prohibited.

Many thanks to J.T. Hunter and Partners in Crime Book Tours. It was an absolute pleasure reading, reviewing, and hosting.

1 thought on “PICT BOOK REVIEW + GIVEAWAY: A Monster of All Time by J.T. Hunter (True Crime)”