THE ESCAPE ROOM
by
Megan Goldin

In Megan Goldin’s unforgettable debut, four young Wall Street rising stars discover the price of ambition when an escape room challenge turns into a lethal game of revenge. Welcome to the escape room. Your goal is simple. Get out alive.

In the lucrative world of finance, Vincent, Jules, Sylvie, and Sam are at the top of their game. They’ve mastered the art of the deal and celebrate their success in style—but a life of extreme luxury always comes at a cost.
Invited to participate in an escape room as a team-building exercise, the ferociously competitive co-workers crowd into the elevator of a high rise building, eager to prove themselves. But when the lights go off and the doors stay shut, it quickly becomes clear that this is no ordinary competition: they’re caught in a dangerous game of survival.

Trapped in the dark, the colleagues must put aside their bitter rivalries and work together to solve cryptic clues to break free. But as the game begins to reveal the team’s darkest secrets, they realize there’s a price to be paid for the terrible deeds they committed in their ruthless climb up the corporate ladder. As tempers fray, and the clues turn deadly, they must solve one final chilling puzzle: which one of them will kill in order to survive?
CLICK HERE TO PURCHASE ON AMAZON!

WELCOME TO THE ESCAPE
ROOM. YOUR GOAL IS SIMPLE.
GET OUT ALIVE.

From The Escape Room. Copyright © 2019 by Megan Goldin and reprinted with permission from St. Martin’s Press.

I received a copy of this book for free from the publisher. This is my honest and thoughtful review.

If you’re like me and you love psychological thrillers, but have grown tired of the alcoholic or amnesiac female lead character floundering around as she tries to make sense of the confusion surrounding her, have no fear! This book is completely unique, intensely woven, and a definite thrill read for summer!
“My mother used to tell me that the best revenge is to live well.”
Alternating between two timelines, two settings, and multiple points of view, this story reads like a fast-paced roller coaster, up and down, around and around until you slam to a stop with the full and glorious knowledge of what has actually transpired. Fair warning though, this book is so hard to put down! I found myself reading as much as I could in between the short and sporadic moments in my day when my kids were engaged. Then I would binge read at night until I couldn’t keep my eyes open any longer! One night, my husband took us to a rock concert where I would read between sets because I NEEDED to know what was going to happen!
“Everything we did was to project the impression of vigor. Inside, we were withering.”
Based on the synopsis, you have a sense that due to the power driven and affluent nature of these successful Wall Street rising stars, there are going to be discussions centered on greed, sexism, manipulation, and materialism; however, nothing can prepare you for the full impact of what this story has to say. By the very nature of the genre, it’s better to step into the pages knowing very little other than the fact that things are definitely not what they seem!
Lured into a team building challenge inside an escape room, these morally bankrupt individuals must finally confront their awful pasts. And what could possibly go wrong? A lot.
This was unlike any thriller I have previously read and highly recommended! I can’t wait to read the author’s next book, which can’t come out soon enough! 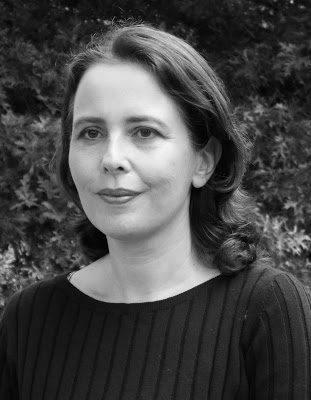 MEGAN GOLDIN worked as a correspondent for Reuters and other media outlets where she covered war, peace, international terrorism and financial meltdowns in the Middle East and Asia. She is now based in Melbourne, Australia where she raises three sons and is a foster mum to Labrador puppies learning to be guide dogs. THE ESCAPE ROOM is her debut novel.
WEBSITE  |  TWITTER  |  FACEBOOK  |  BLOG

Many thanks to St.Martin’s Press and Megan Goldin! It was an absolute pleasure reading, reviewing, and hosting! And be sure to check out the other stops on the tour for more opinions and author extras!