They couldn’t be more different. Or more perfect for each other. New York Times bestselling author Shannon Stacey returns with a warm and cozy opposites-attract Christmas story.

Zoe Randall is busy living her life as she damn well pleases. She’s back in her favorite town, her divorce in her rearview mirror, and living out her childhood dream of running a bookstore with her cousin. She has no interest in the uptight nerd who opened his boring-ass business next to her shop…until he complains about one of her sexy window displays. Then it’s game on.

Preston Wheeler knows he takes life a little too seriously. But when the saucy bookseller next door starts pushing his buttons, he can feel that changing. Beautiful, vivacious Zoe challenges him in all the best ways, and soon he’s pushing her buttons right back: teasing and flirting all the way through the holiday season.

As Preston loosens up and Zoe is treated to the man behind the suit (particularly his forearms), she realizes she’s more interested than she cares to admit. And Preston comes to see the beauty—the absolute delight—in adding Zoe’s bright splashes of color to his once very black-and-white existence.
CLICK HERE TO PURCHASE ON AMAZON!

Preston still couldn’t get those words out of his head. And the reason for that varied depending on the time of day it was.
During daylight hours—even when he’d been handling meetings and finalizing some real estate things in Boston—he’d mull over the statement because it might help explain why Zoe had been so prickly when he reacted badly to the sexy window display. His disapproval had been strictly for the actual display, but she’d obviously been deeply hurt by a man who’d been judgmental about her sexuality.
At night, when he should be sleeping, he couldn’t stop himself from wondering what exactly Zoe Randall wanted to do that could be classified as disgusting.
If anybody ever asked him, he would say he’d never had an overly active imagination. But when it came to Zoe and sex and picturing doing all manner of things with her, he’d found out his imagination was capable of being not only overly active, but extremely creative.
It made sitting around the small living room with her family on Thanksgiving Day pretty awkward for him, and the discomfort wasn’t just from the third helping of macaroni and cheese and sampling four different pies, or not having an idea what was happening in the football game on TV. He tried to focus on the sports, to get his mind off her, but he was so lost he couldn’t invest in either team. During a break in the play, everybody got up to refill their drinks and pick at the desserts, and Preston used the guest bathroom off the back hall. When he came back to the kitchen, Zoe was alone, covering the desserts with plastic wrap.
“Need some help?” he asked, walking over to the table to stand next to her.
“I’m about done.” She licked apple filling off her finger, which made every muscle in his body tense in response, and then turned to face him. They were so close, she had to tip her head up to look up at him and everything but the urge to kiss her faded away.
She reached up and tucked her finger into the opening at his shirt collar, so her fingertip touched his throat, making him swallow hard. “No tie. Top button unbuttoned. Is this your casual look?”
He nodded, not sure he could actually speak until he cleared this throat. “I figured the suit was a bit much for Thanksgiving.”
When she tugged a little at the button her finger was hooked over, he closed the gap between them, putting his hands on her hips. His brain was short-circuiting and he wanted to make sure they were on the same page. “What are we doing right now?”
“Surrendering to the inevitable?”
“Yes.” He barely had time to whisper the word before their lips met and the world shifted under his feet.
As his mouth devoured hers, his hands skimmed over her back and pressed her even closer before he went back to the delicious curve of her hips. She tasted like sweet apple pie and he dipped his tongue between her lips, needing more. 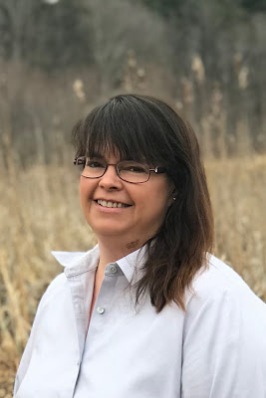 New York Times and USA Today bestselling author Shannon Stacey lives with her husband and two sons in New England, where her two favorite activities are writing stories of happily ever after and riding her four-wheeler. From May to November, the Stacey family spends their weekends on their ATVs, making loads of muddy laundry to keep Shannon busy when she’s not at her computer. She prefers writing to laundry, however, and considers herself lucky she got to be an author when she grew up.
WEBSITE | TWITTER | FACEBOOK | EMAIL

Many thanks to the author and Pump Up Your Book blog tours. It was a pleasure hosting! Check out more of the books on Harlequin’s 12 Books of Christmas Winter 2019 by clicking HERE!  And be sure to check out the other great blogs on the tour for more opinions and author extras!

Book Review at Gimme The Scoop Reviews – One Christmas Eve

Book Review at Becky on Books – One Christmas Eve

Book Review at Cheryl’s Book Nook – A wedding in December

Book Review at Splashes of Joy – Home For Christmas

Book Review at Gimme the Scoop Reviews – Christmas From the Heart

Book Feature at I’m Into Books – All

Book Review at Becky on Books – A wedding in December

Book Feature at ebook addicts – All

Book Review at Gimme the scoop reviews – The Giving Heart

Book Review at Becky on Books – An Alaskan Christmas

Book Review at Gimme the Scoop Reviews – A Coldwater Christmas