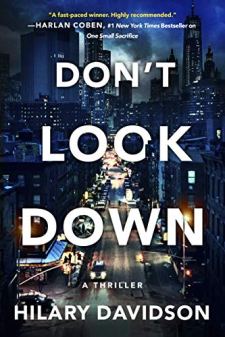 From the Amazon Charts bestselling author of One Small Sacrifice, a gripping mystery about a sinister murder that everyone wants to stay buried—except one dogged NYPD detective.

Jo Greaver is a model of success. Young and ambitious, she’s built a thriving beauty business from nothing. But she has secrets she’ll do anything to keep buried. When her blackmailer offers to meet, Jo expects to pay him off—but gets a bullet instead. Bleeding and in shock, Jo flees with no one to turn to.

When NYPD detective Sheryn Sterling and her partner, Rafael Mendoza, find Andray Baxter murdered in his own home—shot through the heart—everything points to Jo as the killer. Her blood is at the scene, and so are disturbing photos of her taken as a young teen. But Sheryn has doubts. Was the kindhearted Andray really a criminal? Why did he repeatedly report finding spyware in his apartment? Was there something shady about Jo’s sister dying a year earlier?

Something’s not right, and it’s up to Sheryn to piece together the sinister puzzle, no matter the cost.
CLICK HERE TO PREORDER ON AMAZON!

Wow! What a ride and what a gem! I could not put this book down! Seamlessly interweaving multiple points of view that span three days, this is an intensely engaging and compelling police procedural that should not be missed!
Though I had not read the first book in the series, One Small Sacrifice, I will definitely be picking it up soon! This was an amazing reading experience that I look forward to enjoying again when I begin the previous installment. While I never felt any disconnection by entering the story in the second book, some of the dynamics between police partners, Sheryn and Rafael, may have been better understood had I started from the beginning.
I was hooked from the first sentence! The pages couldn’t fly fast enough! Short, suspense filled chapters keep the pace moving at breakneck speed, making it incredibly difficult to put down. The main characters are strongly developed and wonderfully diverse. It was so fascinating to read their alternating perspectives of similar events and how it all comes together into a deeply twisted and dark conclusion. The dialogue flowed naturally, and the clues and evidence were introduced smoothly, while also quite surprisingly, so as to keep you guessing right along with the characters. This intricate mystery is thoughtfully plotted and mesmerizing!
High expectations have been set for this series, and I’m so eager for more!

Hilary Davidson is the bestselling author of One Small Sacrifice and the winner of two Anthony Awards. Her novels include the Lily Moore series—The Damage Done, The Next One to Fall, and Evil in All Its Disguises—and the standalone thriller Blood Always Tells. Her widely acclaimed short stories have won numerous awards and have been featured everywhere from Ellery Queen to Thuglit, as well as in her collection The Black Widow Club. A Toronto-born travel journalist who’s lived in New York City since October 2001, Davidson is also the author of eighteen nonfiction books. Visit her online at hilarydavidson.com.
WEBSITE  |  TWITTER  |  FACEBOOK  |  INSTAGRAM  |  PINTEREST  |  GOODREADS