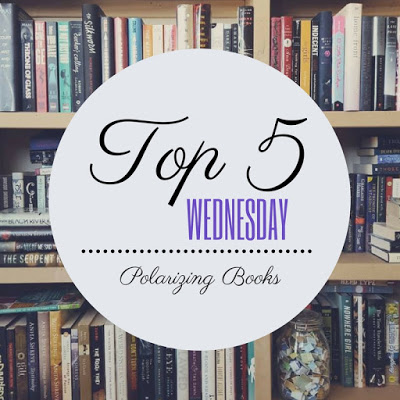 This week’s topic is Polarizing Books!  These are the books that people tend to either love or hate with no in between.

Want to find out what my Top 5 Wednesday Polarizing Books are?

This is one of those books that people tend to hate a lot!  Whether it’s the writing, the themes, its popularity, or for any host of other reasons, people love to hate this book.  I enjoyed it for what it was when I read it over a decade ago.  It would be interesting to reread it and see if it held up, but I think for a fast-paced action thriller, it delivered.  I thought Angels and Demons was a little better, but I never went on to read the other books in the series.

I see this one a lot on people’s worst or best lists.  I really enjoyed this book and you can check out my review for more information.
This is my favorite series, but I can honestly understand why people would have a problem with it.  It’s a tome for one thing, which can be a big deterrent for many.  Plus, continuing with the series is a huge investment because the books don’t get any shorter and they are not complete!  I can only imagine what it would have been like to be someone who discovered this book when it was published in 1996 and is still waiting for the end!  And let’s not even get into the emotional destruction this book can wreck!  There are also probably a lot of people who believe that since they watch the show then they don’t need to read the book, but you are ultimately missing out on a whole lot of detail that could seem overwhelming if not confusing at times.  Oh, and did I mention the topics!  Rape, murder, incest, infanticide, regicide, war, domestic violence, class structure, mental illness, torture, and it goes on and on.  You name it, it’s in there!  This alone can weigh a person down and sometimes I even question how I can love a series so much with so many distressing themes!  But in the end, I’m always blown away.  With every reading, I learn something new, giving me something else to obsess over.  However, it never escapes me that this doesn’t work for everyone and I can definitely understand why.
I’ve talked about this one before and stated that I think it’s just really overrated.  Lots of people believe this is the quintessential exploration of teen angst, but I just find it pretentious.  I didn’t get it when I read it as a teen, and now as an adult, I definitely don’t get it even more.  I can appreciate its status as a classic in the canon of literature, but that’s where I leave it.
This is another one that I am always surprised to see on so many disappointing or worst of reads.  The mystery aspect of this story is not something that you will see coming.  In my opinion, there were not an adequate amount of clues or information revealed throughout the story for the culprit to be determined, but I liked that.  This is an adult mystery series written by J.K. Rowling and perhaps many believed they would be getting a mystery series in the vein of Harry Potter, and the fact that the story and writing were so different was not appealing to readers.  But I like that she’s taking chances and stepping away from all of that to create something new.  Not everything can be Harry Potter and it shouldn’t have to be.  I’m looking forward to continuing the series as well as checking out the show when it comes out.

So those are the books that I consider the most polarizing!  Do you have any?  Please share in the comments because I love adding to my TBR pile!