Greetings Friends!
Today I am so excited to be participating in an author spotlight that includes an interview as well as a giveaway!
Let’s meet M. Tara Crowl!  She is the author of Eden’s Wish and Eden’s Escape, a middle grade fantasy series about a young genie who finds a gateway to Earth.

Tara grew up in Murfreesboro, Tennessee.  She studied Cinematic Arts at the University of Southern California, then received an MA in Creative Writing at Macquarle University in Sydney, Australia.  She lives in New York City.
You can find her on Facebook, Twitter, Instagram, and her website.
Tara graciously offered to answer a few of my questions.

How did you come up with the idea for the Eden of the Lamp series?  Are there plans for any more adventures?

One day I was listening to the audio book of Sophie’s World by Jostein Gaarder, and it mentions, very briefly, the prospect of meeting a genie and being able to make three wishes.  I think that when the genie myth comes to mind, most people do usually see it from that perspective, and we dream about what we’d wish for.  But that day, I started imagining what it would be like to be a genie.   I thought being trapped inside an oil lamp would be a nightmare.  You’d have no friends, no fresh air, and no freedom.  You’d only get to leave when some random person rubbed the lamp, and you could only stay on Earth for as long as it took to grant their wishes.  You could give people their greatest fantasies, but you’d have no power over your own life.

From there, I started to dream up the character of Eden.  She’s in love with the world – trees, grass, sunshine, the ocean – but she can’t explore it until she’s completed her career as a genie.  The story and the other characters grew from there.

Why do you like to write for young readers?

Young readers are so open to imagining with you.  They’re not cynical or closed-minded; they’re ready to go on the adventure.  As the author, you can erase the boundaries between reality and fantasy and run with the story.

I love how your stories blend fantasy with the real world settings of New York and Paris!  Did you visit specific places to help you make these settings come alive on the page, and if so, how does that help you in your writing process?

Thank you!  Yes, I did.  I live in New York, so it was easy to revisit places I wanted to include (like Times Square and the Empire State Building) and make sure I got the details right.

As for Paris, the premise of Eden’s Escape was actually inspired by a trip there.  Right before Eden’s Wish sold to Disney-Hyperion,  I took a solo trip to Europe.  I fell in love with Paris, and I decided that if the book sold, I wanted to write a sequel and set it there.  At the time, I didn’t dare to believe it could really happen.  But a few days after I got back from my trip, I learned that it had sold in a two-book deal.  So the next year, I went back to Paris for a few weeks to research and write.  I’m so incredibly grateful that I got to live out that dream, and I still can’t quite believe it.

If you could meet a genie, what would you ask for?

I recently heard another author describe how she knew she wanted to write because of its power to make people feel something.  Did you ever have a moment like that where you experienced the power of language?

I think that’s the ultimate goal for anyone who writes or creates any kind of art.  To make someone else feel something; to connect with someone you’ve never met through words you’ve written.  I experience the power of language all the time, whenever I read.  For example, the other day I was reading one of my favorite poems by E.E. Cummings, “anyone lived in a pretty how town,” and as many times as I’ve read it, I can barely get through it without crying.  What a profound kind of power that is.  It’s baffling, what words can make you feel.

What are you currently reading?

I’m reading Sweetbitter by Stephanie Danler and listening to The Handmaid’s Tale by Margaret Atwood.  I listen to audio books when I run on the treadmill. 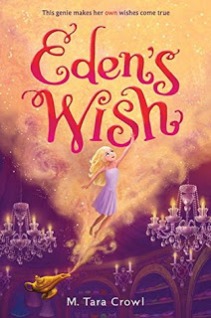 All twelve years of Eden’s life have been spent in an antique oil lamp.  She lives like a princess inside her tiny, luxurious home; but to Eden, the lamp is nothing but a prison.  She hates being a genie.  All she wants, more than anything, is freedom.

When Eden finds a gateway to Earth within the lamp she takes her chance and enters the world she loves.  And this time, she won’t be sent back after three wishes.

Posing as the new kid at a California middle school, Eden revels in all of Earth’s pleasures, but quickly learns that this world isn’t as perfect as she always thought it was.  Eden soon finds herself in the middle of a centuries-old conflict between powerful immortals.  A ruthless organization run by a former genie will stop at nothing to acquire the lamp and its power – even hurt Tyler and Sasha, the new mortal friends who have given Eden a home.  To save her friends and protect the lamp’s magic, Eden must decide once and for all where she belongs.

Eden’s new life on Earth begins in New York City under the guidance of her new guardian:  Pepper, a petite, bubbly genie alum who’s also a Broadway actress.  Before she has a chance to settle in, though, Eden is whisked away for a granting – only to find herself trapped in a laboratory.  David Brightly, owner of the world’s leading tech company, cares more about tapping into the lamp’s power than making a wish and starts performing tests on Eden.  With Brightly’s plasma shield around the lamp, Eden has no way home.  Left without a choice, she escapes the lab and goes on the run.  After her daring exit, Eden finds herself on the streets of Paris – home to Electra’s headquarters.  Left in a strange city with a price on her head (courtesy of scheming Brightly), Eden has to keep her wits about her.  She dons a chic disguise and flits around Paris incognito, investigating Brightly Tech.  Assisted by Pepper and her old adversary Bola, as well as some new friends, Eden embarks on a quest to retrieve the lamp and protect the secrets of the genie legacy.

“Middle grade readers will enjoy the children’s autonomy and Eden’s humorous difficulties in grasping how school works…Hand this to readers who like their magical fantasy combined with middle school drama.”  – School Library Journal

“An imaginative romp with a smart, snarky protagonist and a humorous interpretation of the world as we know it…[Eden] is also just plain entertaining, with a sassy attitude and a cleaver wit that saves her on more than one occasion.” – BCCB


And now for the GIVEAWAY!

a Rafflecopter giveaway
Thank you again Tara for this wonderful opportunity to get to know you and your works!

I hope you all enjoyed this author spotlight, and with any luck, I can provide more in the future!