I was graciously contacted by the author of The Azrael Initiative and a copy was sent to me for free in exchange for my honest and thoughtful review.  All thoughts, opinions, and feels are my own. 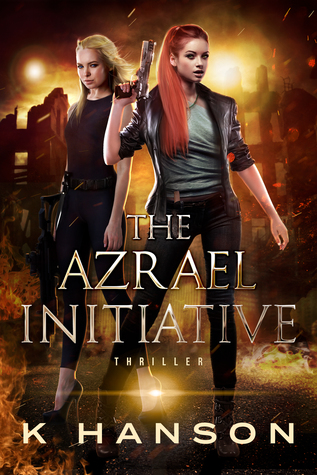 Best friends Kayla, an engineering student, and Olivia, a nursing student, are nearing the end of their college career when terrorists attack their university.  Through a combination of cleverness, bravery, and luck, the two manage to foil the deadly plot.  A mysterious man from the United States government, Mr. Hightower, sees their potential and attempts to recruit the women for a program to take on ISIS.  While they initially refuse, another terrorist attack that strikes close to home pushes them to change their minds and join the Azrael Initiative.
After several months of hard training, the two women are dropped into Al-Raqqah, the capital of ISIS, in Syria.  Once there, they must blend in with the locals as they strike from the shadows to kill ISIS leaders, destroy their facilities, and free captives.  As Americans deep with enemy territory, they know that they will be killed if discovered.  As women, they also know that they would suffer before death.  Walking the line between vengeance and justice strains their relationship.  As they work to resolve their differences, the symphony of brutality around them ultimately pushes them closer together and forges them into the warriors that they were meant to become.

This is not normally a book that I would pick up; however, I was intrigued by the idea of reading an advanced copy of a self-published author’s debut work as well as how he was going to handle the very relevant topic of terrorism and the fight against ISIS.  I was especially interested in seeing how these two young women were going to single-handedly take on the brutal extremism of ISIS, but ultimately, my military background and experience made it extremely difficult for me to suspend my disbelief of the characters’ decisions and actions as the story progressed.

There were many moments were the narrative would simply unravel for me.  For example, there is just no way that these two women with very little significant experience could become battle-trained, fluent in Arabic, and proficient in various weapons systems after only two months of training.  To put that into perspective, every person who decides to join the Army goes through a 10-week basic combat training.  Let’s say that they went on to become infantrymen, they would then go to another 14 to 16 week training course to learn that specific military occupation.  So essentially, your basic infantryman receives up to 26 weeks of training, which does not include any of the additional special schools that a soldier of this branch would then perhaps go on to pursue:  Airborne (3 weeks), Ranger (8 weeks), Air Assault (2 weeks), Pathfinder (3 weeks).  Learning Arabic alone at the Defense Language Institute is 63 weeks!  But apparently, these women and the training facility they arrive at are so badass and hardcore that they can produce the caliber of warrior that the Army spends years trying to achieve in only two months.  I know I sound overly critical on this point, but I just think that perhaps when you’re going to discuss these very real issues, a degree of realism should be paramount.  Making these jobs and skill sets seem so easy to obtain paints a false impression to the casual reader that anyone can do it and that just isn’t the case.  And given the competency these women exude once they arrive in Syria, there is just no way for me to believe that they gained it after so short a training time.  Even their encounters with the terrorists themselves were just way too simplistic, while the story’s conclusion was way too over the top and extreme to be relatable or understandable.

The story largely consists of dialogue between the main characters, and though they are best friends, it comes across awkwardly and never flows naturally between them, especially during many personal and intimate moments they share.  With so much dialogue going on, it was unfortunate that the characters expressed no internal monologues where we could have been privy to the doubts, struggles, and frustrations that would normally surround the very intense situations they find themselves a part of.

Overall, this is not a complicated read.  It’s like watching a Transformers movie.  You watch it because you like the action and the explosions, not for substance.  You don’t go into it looking for dramatic character development or impressive storytelling.  I guess I went into reading this book expecting more, but it just didn’t deliver and sometimes that happens.  Ultimately, this book wasn’t for me and though I won’t be continuing on with it as it appears set to become a series, I can appreciate the enjoyment that others may get out of it.  This book will be released March 3, 2017 and is currently available for pre-order.

Thanks to K. Hanson for providing me with an advanced copy and best wishes in all future writing endeavors!