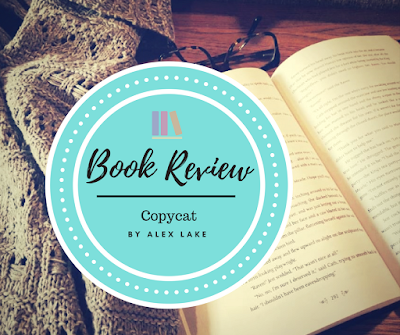 Greetings Friends!
Today, I have a review of the new psychological thriller Copycat by Alex Lake.

Your stalker is everywhere.
Your stalker knows everything.
But the real problem is that your stalker is you.Sarah Havenant discovers–when an old friend points it out–that there are two Facebook profiles in her name.One, she recognizes: it is hers. The other, she has never seen. But everything in it is accurate. Recent photos of her and her friends, her and her husband, her and her kids. Even of her new kitchen. A photo taken inside her house.She is bemused, angry, and worried. Who was able to do this? Any why?But this, it soon turns out, is just the beginning. It is only now–almost as though someone has been watching, waiting for her to find the profile–that her problems really start…

Alex Lake is a British novelist who was born in the North West of England. After Anna is the first book to be written under the author’s pseudonym, and it has been a No.1 bestselling ebook sensation. The author now lives in the US, in Brunswick, Maine.

You can connect with the author through social media on:

A few years ago when the author’s first book After Anna was released, I was inundated on social media about how much I would love that book. I never got a chance to read it, but it was with that curiousity that I was able to get an advanced reader copy last year of Killing Kate, which we choose to read in my book club and you can check out my full review here. While it started out extremely slow, around the middle, it took off and never stopped! Becoming quite outlandish in its intensity, I was taken aback at some of the violence that occurred towards the end that seemed slightly gratuitous for this type of thriller. In the end, I wasn’t completely sold; however, I knew I was interested to see what Lake would write next.

I never heard much from anyone about either After Anna or Killing Kate nor was I privy to any information about another book coming out, so it was quite surprising when a few days after Christmas, while perusing the book section at Target of all places, I found Copycat. The premise intrigued me that I couldn’t believe I hadn’t heard ANYTHING about this new book! This may have certainly drummed up the intrigue, but after a few sittings of reading that stole time from my life that I will never get back, it has already made the worst of the year two weeks into 2018!

Many of the same problems I had with Killing Kate exist with Copycat, but the extreme violence has been ratcheted up even more and into levels that I think would definitely stun if not disturb a more casual thriller reader. Don’t get me wrong. I’m a huge fan of stories about serial killers which can run the gamut, but you always know to some extent what you’re getting into when you pick one up. What I thought I was getting with this book was nothing that ended up being delivered to me.

The pacing is extremely slow in the beginning even in order to set up the situation the main character is facing, and that doesn’t even prepare you for what is coming. Nothing can. The day to day minutia drags on for way too long and then suddenly everything spirals out of control like a balloon losing air and just flying haphazardly around a room from one direction to another. But by far the biggest disappointment for me was anticipating a thriller that was billed as something profoundly realistic (stolen identity and stalking) and resulted in the most ludicrously and laughable scenario that you couldn’t even suspend your disbelief for. While I had my suspicions about the antagonist early on, I couldn’t begin to tell you why this person was exacting so much vengeance; however, no one would ever figure it out unless you slog through to the end and listen to the dialogue heavy info-dump that spells it all out. As I stated in my review of Killing Kate, I “like seeing the steady unraveling as characters discover clues that lead them towards the horrible understanding of what is going on,” but this one hits you right in the face at the same time that the main character figures it out as well.

This is grade A hyperbolic Lifetime movie shock and awe, and there in lies the rub. It’s the worst junk food you could get your hands on, and while you know you have to put it down because it’s just going to cause problems, you keep shoveling it in, or in this case, reading. I can’t deny that the story was addictive. I continued coming back wanting to know what was going to happen and how this whole thing was going to end, and needless to say, it wasn’t good. As ridiculous as this sounds, everything was neatly wrapped up with a little bow, yet open-ended enough to suggest a sequel.

Overall, I wasn’t impressed. While I’m intrigued to check out After Anna to see if it was at all any different than these last two, I’m not sure I will continue with any future books. In the end, it’s all personal preference and it does actually receive fairly high ratings on both Goodreads and Amazon, although I wonder if we all read the same book! If you decide to read this one, please let me know your thoughts because I’m apparently in very small company with this one.