SCROLL DOWN FOR GIVEAWAY!

Val Deniston is catering the debut of Bayport’s newest bookstore—but the death of a customer is about to draw her into a real-life murder mystery… Suzette Cripps has been occupying a spare bedroom at Val’s granddad’s house while she takes classes in this Maryland Eastern Shore town—but she’s always seemed a little secretive and fearful, and any talk about her past is a closed book. After winning the costume contest at the Halloween-themed bookstore party, Suzette is mowed down by a hit-and-run driver—and Val and her grandfather start to wonder whether it was really an accident or if someone was after Suzette. Granddad is a little distracted by his new enterprise as a ghost-buster, but as Val talks to Suzette’s coworkers and fellow creative writing students, she grows more convinced that the dead woman’s demons weren’t imaginary—and that she needs to rip the mask off a killer … Includes delicious five-ingredient recipes!

GHOSTS IN CRYPT SUZETTE
In writing Crypt Suzette, I tried to incorporate a number of things associated with Halloween: sweet treats, of course, since I’m writing a culinary mystery, but also costumes, ghosts, a haunted house, and a black cat whose favorite haunt is a graveyard. “In literature,” the novelist Tabitha King says, “the ghost is almost always a metaphor for the past.” Ghosts serve exactly that purpose In Crypt Suzette. My sleuth Val, a café manager, and her grandfather team up to solve the mystery of a young woman who’s been renting a spare room in Granddad’s house.
Suzette, who is working her way through college, is secretive and fearful. She never talks about her family or her job. She’s apparently avoiding someone, taking roundabout routes home from the hotel where she works. When she’s found dead of an apparent accident, Val and Granddad suspect foul play. Delving into Suzette’s past, they discover that her demons weren’t imaginary and may have finally caught up with her.
Crypt Suzette also explores a lighter side of ghosts. When a haunted house tour stops at the old Victorian that Val and Granddad share, he hits on a new money-making scheme. He announces that he’s gotten rid of their ghost and offers to do the same for other people with ghost-infested houses. He’s soon fielding calls from prospective clients. Amazingly, his ghost-hunting nets a real criminal and a suspect in the hit-and-run that killed Suzette. At the end of the book, Val comes up with a way to trap the murderer. Her scheme, which involves creating the illusion of a ghost, unmasks a killer as haunted by the past as the victim was.
Ghost and paranormal stories have a long literary history. I tapped into that history by borrowing the names of characters in and authors of eerie tales. I repurposed those names for my suspects and secondary characters. As you’re reading the book, I hope those names will remind you of great stories and story-tellers. How many literary ghosts, those haunted by them, or those who created them do the characters in Crypt Suzette conjure up for you?
I hope you enjoy the mystery and the ghost-hunting. 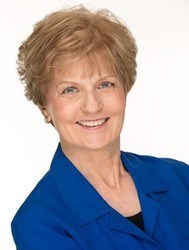 Maya Corrigan blends her love of food and detective stories in her Five-Ingredient Mystery series set in a fictional historic town on Maryland’s Eastern Shore. The first book in the series, By Cook or by Crook, was published in 2014.
Before taking up a life of crime (on the page), she taught university courses in writing, detective fiction, American literature, and drama. She won the 2013 Daphne du Maurier Award for Excellence in Unpublished Mainstream Mystery / Suspense. Her short stories, written under the name of Mary Ann Corrigan, have been published in anthologies.
When not reading and writing, she enjoys theater, tennis, trivia, cooking, and crosswords. Her website features trivia about food and mysteries.
WEBSITE  |  FACEBOOK

Many thanks to Great Escapes Virtual Book Tours and Maya Corrigan! It was a pleasure hosting! And be sure to check out the other stops on the tour for more opinions and extras!