BURIED IN THE STACKS 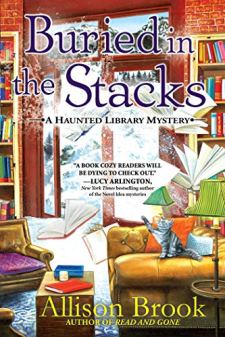 Librarian Carrie Singleton is building a haven, but one of her neighbors is misbehavin’. Can resident spirit Evelyn help Carrie catch the culprit who made her a ghost? In winter, the Haunted Library is a refuge for homeless townspeople. When a group purchases a vacant house to establish a daytime haven for the homeless, Carrie offers the library as a meeting place for the Haven House committee, but quickly learns that it may be used for illegal activities. As the new Sunshine Delegate, Carrie heads to the hospital to visit her cantankerous colleague, Dorothy, who had fallen outside the local supermarket. She tells Carrie that her husband tried to kill her–and that he murdered her Aunt Evelyn, the library’s resident ghost, six years earlier. And then Dorothy is murdered–run off the road as soon as she returns to work. Evelyn implores Carrie to find her niece’s killer, but that’s no easy task: Dorothy had made a hobby of blackmailing her neighbors and colleagues. Carrie, Evelyn, and Smoky Joe the cat are on the case, but are the library cards stacked against them?
CLICK HERE TO PURCHASE ON AMAZON!

Why I Write Cozies
by Marilyn Levinson
Like many novelists who have been writing for several years, I have written in several genres—mysteries, romantic suspense and books for kids. Recently, I find myself drawn to writing cozies. Here’s why:
1. I enjoy writing mysteries and prefer leaving the CSI end of it to others. I’m interested in the puzzle aspect. The human factor. How my characters relate to one another. Why was a person or persons murdered? How does my sleuth track him or her down and prove his or her guilt?
2. I love writing a mystery from an amateur sleuth’s perspective. Not a homicide detective armed and trained to solve murders, but a so-called “average” citizen with enough intelligence, drive, and curiosity to solve a mystery. Like Agatha Christie’s Miss Marple, cozy sleuths observe suspects. They ask questions. They eavesdrop. They do research. They befriend the police investigating the murder. In my Haunted Library mystery series written as Allison Brook, Carrie Singleton is the head of Programs and Events of the Clover Ridge Library in Connecticut. Sleuths in my other mystery series are a high school English teacher, a retired CEO, and a college professor who leads a Golden Age of Mystery book club.
3. While I enjoy plotting, my characters are my priority. What makes each of them tick? How do they relate to one another? Why do they behave the way they do? Some of my characters are quirky. Others are likable. They are very real to me. They have to be since they appear in one book after another.
4. I love writing cozies because they’re written in series. I love writing series because with each new book, readers get a chance to learn more about my sleuth and her friends, family, love interests and enemies. My characters evolve and mature. In the Haunted Library series, Carrie Singleton starts out as an unhappy loner who dyes her hair purple and wears Goth-style clothing. Over time she develops friendships, a romantic relationship, and a growing concern for the town where she lives.
5. I ADORE secrets. Many of my characters have secrets that impact their current behavior. Secrets can make a character look guilty when she isn’t. Secrets can drive a character to murder.
6. Cozies are set in small towns where everyone knows everyone else. A cozy’s setting is another character of the story because it affects all the characters. My Haunted Library mystery series takes place in Clover Ridge, CT, a small town with centuries-old homes, restaurants, and shops built around a village green. The library where my sleuth, Carrie Singleton, works is housed in one of these large former residences.
7. Romance winds its way in many cozies. In DEATH OVERDUE, the first book in my Haunted Library series, Carrie finds herself attracting the attention of two very different men.
8. Animals and cozies go hand-in-hand. In DEATH OVERDUE, a stray half-grown cat attaches himself to Carrie and she ends up bringing him to work with her. Smoky Joe proves to be very sociable and becomes the Library Cat. In one book in the series he helps solve a mystery.
9. Cozies are resolved on a happy note. The murderer is caught. Future books in the series give one’s sleuth an opportunity to forge more adventures and solve more mysteries. 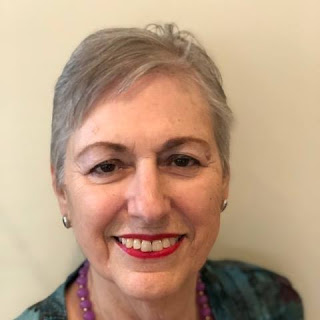 Allison Brook is the pseudonym for Marilyn Levinson, who writes mysteries, romantic suspense, and novels for kids. She lives on Long Island and enjoys traveling, reading, watching foreign films, doing Sudoku and dining out. She especially loves to visit with her grandchildren on FaceTime.
WEBSITE  |  FACEBOOK  |  TWITTER  |  PINTEREST  |  GOODREADS  |  AMAZON
GIVEAWAY!

Many thanks to Great Escapes Book Tours and Allison Brook! It was a pleasure hosting! And be sure to check out the other stops on the tour for more opinions and extras! 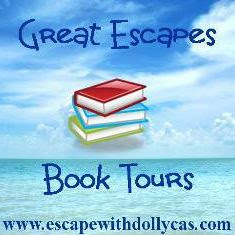 1 thought on “GUEST POST: Buried in the Stacks by Allison Brook (Cozy Mystery)”