In Poland, as World War II rages, a mother hides with her young daughter, a musical prodigy whose slightest sound may cost them their lives.

As Nazi soldiers round up the Jews in their town, Róza and her 5-year-old daughter, Shira, flee, seeking shelter in a neighbor’s barn. Hidden in the hayloft day and night, Shira struggles to stay still and quiet, as music pulses through her and the farmyard outside beckons. To soothe her daughter and pass the time, Róza tells her a story about a girl in an enchanted garden: The girl is forbidden from making a sound, so the yellow bird sings. He sings whatever the girl composes in her head: high-pitched trills of piccolo; low-throated growls of contrabassoon. Music helps the flowers bloom.

In this make-believe world, Róza can shield Shira from the horrors that surround them. But the day comes when their haven is no longer safe, and Róza must make an impossible choice: whether to keep Shira by her side or give her the chance to survive apart.

Inspired by the true stories of Jewish children hidden during World War II, Jennifer Rosner’s debut is a breathtaking novel about the unbreakable bond between a mother and a daughter. Beautiful and riveting, The Yellow Bird Sings is a testament to the triumph of hope—a whispered story, a bird’s song—in even the darkest of times.
CLICK HERE TO PURCHASE ON AMAZON!

Inspired by the true stories of Jewish children who were hidden from the Nazis during World War II, this is the heartbreaking story of a mother and her young daughter facing unimaginable circumstances that were unfortunately all too real. As a mother myself, it was excruciatingly painful to witness the life or death choices that Róza must make in order to protect her daughter, Shira. But stories like this are important reminders to all of us that in fact, yes, true horror does exist.
Beautifully written, this is a harrowing and truly unforgettable exploration of one of the darkest realities in our recent history. From the Summer of 1941 to the Autumn of 1945, readers travel in stunned silence alongside mother and daughter as they attempt to survive the sudden upending of life as they knew it. As a five-year-old girl, Shira is constantly in motion and excited to rhapsodize about the world around her, yet Róza knows these wonderful sounds of childhood are noise that will only result in their demise. As a musical prodigy, Shira listens to the sounds around her, composing orchestras that vibrate through her body, and as a musician herself, Róza is rocked by memories of the music she and her husband once made. To calm Shira, and quite honestly herself, during so much stillness, Róza crafts the story of the yellow bird that sings. While the narrative largely focuses on the bond shared between Róza and Shira, the gut-wrenching realities of the war cut in like staccato notes shaking everyone out of any sense of normalcy they try to make even in such perverse times.
The quest for survival drives even more life-altering decisions that echo their traumatic reverberations as life goes on. Yet, just as suddenly as everything was taken away, the yellow bird lands, returning hope and undeniable love.
Many thanks to Flatiron Books and the author for providing me with a free copy of the book for review. This is my honest and thoughtful opinion.

Jennifer Rosner is the author of If A Tree Falls: A Family’s Quest to Hear and Be Heard, a memoir about raising her deaf daughters in a hearing, speaking world and discovering genetic deafness in her family dating back to the 1800s. Her children’s book, The Mitten String, is a Sydney Taylor Book Award Notable. Jennifer’s writing has appeared in the New York Times, The Massachusetts Review, The Forward, Good Housekeeping, and elsewhere. The Yellow Bird Sings is her debut novel and is being published around the world.
FACEBOOK  |  TWITTER  |  AMAZON AUTHOR PAGE 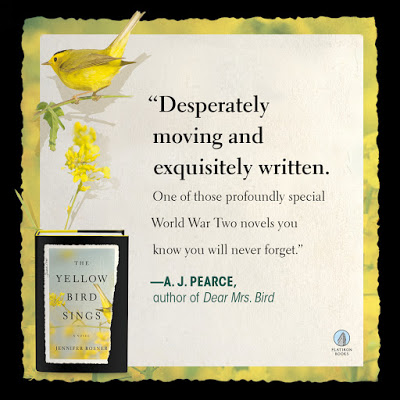 a Rafflecopter giveaway  Best of luck!
Many thanks again to Flatiron Books and the author! It was a pleasure reading, reviewing, and hosting!