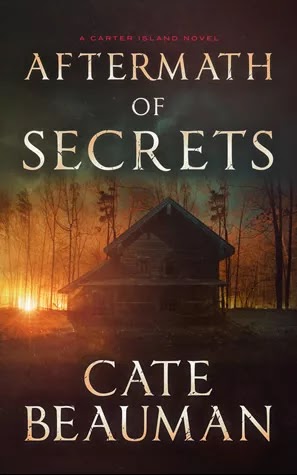 When the secrets of the past threaten to destroy the future…

Boston’s Most Eligible Bachelor has it all: good looks, a great career, and plenty of wealth and prestige. But Bradley Sanderson’s charmed life quickly falls apart when scandal rocks his famous family. Arrests have been made; the media circus has begun, and Brad’s been tasked with the daunting chore of restoring the Sandersons’ good name. Moving back to Carter Island and picking up the pieces hasn’t been easy, especially when the one person he needs the most won’t give him the time of day.

Bakery owner and island resident Molly Carter is loyal to her core, but that doesn’t mean Brad’s homecoming hasn’t left her torn. Brad’s darkest days aren’t lost on Molly, but reaching out to her lifelong friend isn’t so simple when she’s forced to guard her heart. Everything changed when she woke up alone after their sexy summer night.

The complications keep coming when Brad’s long-lost brother shows up in town, bringing the remnants of his checkered past with him. Forgiveness and redemption are possible for all, until new secrets come to light that may have dire consequences.

PRAISE FOR THE BOOK:

“5 Stars! I’m a big sucker for a good love story, especially one that has drama. Aftermath Of Secrets by Cate Beauman provided both in a beautiful way. I was swept in by the characters, their wants, and desires.” -Shannon Winings, Readers’ Favorite Book Awards

“What do you think it’s been, five or six years since you’ve been home for more than a week in a row?”

He shrugged, pushing off the wall, moving her way. “Sort of.”

Molly winced, foolishly forgetting that life for Brad was currently unrecognizable. “I guess that was pretty dumb of me to say.”

“No, I just meant Nate isn’t here hanging out in his boxers, and I haven’t done this yet.”

“Dunked you,” he said as he pressed his hand on top of her head and sent her under.

She sank beneath the watery depths, slapping at his hand and arm as he kept her submerged for a good three or four seconds. She came up sputtering and glaring. “You idiot.” She coughed again. “Are you trying to drown me?”

He dismissed her with a chuckle and flippant raise of his brow. “So dramatic. We had about three minutes before we needed to start worrying about brain damage.”

Her eyes narrowed again. “Oh, you’re dead,” she said, gritting her teeth, charging after him.

He laughed, swimming away.

But they were well-matched, both of them excellent swimmers. All the Sanderson and Carter kids had had numerous lessons in their younger days due to their proximity to the Atlantic.

She hooked her arm around his neck, maneuvered her way onto his back, and sent them both underwater, her legs locking around his waist to keep her leverage. But his sheer size and strength were her disadvantage.

Then they both surfaced for air, Brad laughing before she brought him under again. Within seconds, he had their positions reversed, and he held her against him, one arm wrapped around the front of her waist, the other around her shoulders as they came up for another draw of air.

His breath puffed against her neck in hot torrents as their legs brushed with their kicks to stay afloat, while he let her waist go and used his arm to tread water. “Molls, this is quite a predicament.

He wasn’t kidding. She was pinned beneath his strong arm, and her back was pressed against his solid chest, with no choice but to grip his muscular forearm caging her in place. “Fine. You win.” She just needed him to let her go.

“That’s it? Since when do you give up so easy?”

Since he’d kissed her brainless and taken her to bed. “Since I realized it’s time to get home and get changed for your party at Nate and Callie’s.” She tried to move away from him.

He switched arms, now holding her around the waist, and began keeping their heads above water with his opposite arm. “No problem. Just say, Brad, you’re the best Scrabble player I know. I bow to you, you genius.”

She huffed out a laugh, raising her arm to the surface to help keep their chins from bobbing under. “I won. Three years in a row now.”

“Just luck.” He held her tighter, whispering next to her ear, his voice full of teasing. “You’re the best, Brad. That’s all I need to hear.”

“Broody Brad,” she murmured, knowing he hated it when she called him that—a slight from their childhood.

“What was that?” he asked, drilling his fingers into her side, tickling her.

She scream-laughed. “Damn it, Brad.” She fought him enough to turn and immediately realized her huge mistake as he held her chest to chest, and they stared into each other’s eyes.

He grinned. “This is certainly a situation.”

A droplet trailed down his face to land on his firm bottom lip, and his eyelashes were webbed together, making him even more irresistible than he already was. Her heart pounded, her pulse thundering in her throat, and she glared at him, needing to be free of him, well aware he was enjoying this far too much.

There was an undeniable attraction between them. All she had to do was press her mouth to his, and they would have a repeat of August. But they weren’t going there again. She wasn’t risking their friendship a second time.

Cate Beauman is the multi-award-winning, international bestselling author of The Bodyguards of L.A. County series and the Carter Island Novels. She is known for her full-length, action-packed romantic suspense and contemporary stories.

Cate makes her home in New Hampshire with her family and their St. Bernards, Bear and Jack.