Greetings Friends!
Today, I have another book blast featuring the cozy mystery Occult and Battery by Lena Gregory, the second book in the Bay Island Psychic Mystery series. 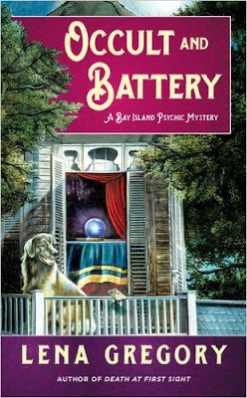 A murder mystery weekend becomes a little too real in the latest Bay Island Psychic Mystery from the author of Death at First Sight.
Cass Donovan uses her skills as a former psychiatrist to get away with pretending to be psychic, but she’s not about to let anyone get away with murder.
The outlook is not so good for Cass’s psychic shop, Mystical Musings. With winter winds discouraging tourists from riding the ferry from Long Island to Bay Island, Cass hopes to draw in more customers by hosting a murder mystery weekend, complete with a séance, in a supposedly haunted mansion.
But Cass begins to lose her spirit when her ex-husband shows up, along with his fiancée—Cass’s ex-best friend. Then, after one of the guests is found dead, a blizzard blows in, trapping everyone inside with a murderer. Now Cass must divine who did the deed before her reputation and her livelihood fade away.
For more information:
Amazon | Barnes and Noble

Bee Maxwell slammed on the brakes, skidding to a stop on the sand-covered shoulder. Without loosening his white-knuckled grip on the steering wheel, he turned a glare on Cass. “Are you crazy? What’s the matter?”

Cass released her hold on the dashboard and shot him a grin. “We’re here.”

A hand the size of a baseball mitt fluttered to Bee’s chest, with all the drama of a true diva. “You nearly gave me a heart attack because we’ve arrived at our secret destination?” Gritting his teeth, he shifted gently into park. No way would he jam the shifter into gear, even though she could tell he badly wanted to. The black Trans Am was his baby, always to be treated tenderly. Cass, on the other hand, was a different story. Bee looked about ready to throttle her. “Wouldn’t it have been easier to just tell me where we were going?”

Stephanie Lawrence poked her head between the seats to stare at Cass. “Not that I want to agree with Bee, but really, Cass, you could have just told him where to go. Then maybe this maniac wouldn’t have nearly put us through the windshield.”

She shrugged. “I didn’t think he’d agree to take me if I told him where we were going.”

Bee waved a hand in dismissal and glanced out the window, as if realizing for the first time where they were.

The old, supposedly haunted Madison Estate perched in the center of the highest ground on the island, amid dried-up beach grass, trees long since devoid of leaves, and garbage from whatever kids were brave—or stupid—enough to ignore their parents’ warnings. Thick, grey clouds gathered overhead, lending credence to the haunted stories Cass had heard since childhood.

A dainty shiver ran through Bee’s bulky frame. “Well, if your destination has anything to do with that house, you can just count me out.”

“But it’s perfect.” She opened the door and shot him a quick grin over her shoulder.

“Hey. Where are you going?”

Ignoring Bee’s protests, Cass climbed from the car. She closed the door behind her, effectively cutting off any further arguments. Bee happened to be deathly afraid of ghosts. Not that he believed in them. 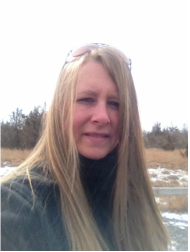 Lena Gregory lives in a small town on the south shore of eastern Long Island with her husband and three children. When she was growing up, she spent many lazy afternoons on the beach, in the yard, anywhere she could find to curl up with a good book. She loves reading as much now as she did then, but she now enjoys the added pleasure of creating her own stories.

You can also connect with her on:

And now for the GIVEAWAY! 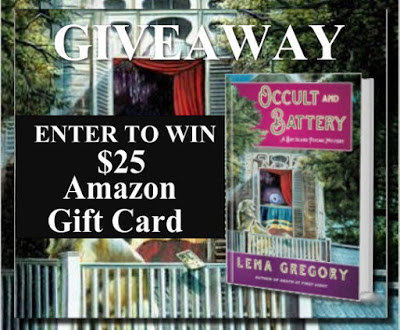 Terms & Conditions:
By entering the giveaway, you are confirming you are at least 18 years old.
One winner will be chosen via Rafflecopter to receive a $25 Amazon Gift Card.
This giveaway ends midnight April 30, 2017.

Good luck everyone!
ENTER TO WIN!

Many thanks to Lena Gregory and Pump Up Your Book for this exciting giveaway!