Today I have a book blast for Her Final Watch by Marguerite Ashton, the second book in the Detective Blanchette mystery series. 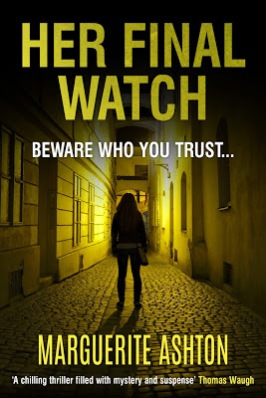 Speaking second-hand truths can be deadly.

Detective Lily Blanchette will stop at nothing to solve a murder. Her current case involves the killing of an undercover cop working to bring down the mob for prostitution and drugs. But Lily’s usual laser-like focus on the case has been disrupted.

Two weeks earlier, she learned she was pregnant by her murderous husband whom she’d killed in self-defense. Unsure whether to keep her baby or place the child of this cruel man up for adoption, Lily keeps the pregnancy a secret from her colleagues.

Under mounting pressure to solve the case, Lily arranges a sit-down with a local mob boss only to find out her suspect is also wanted by them. But before Lily can warn her team, she and her new partner, Jeremiah, are shot at, and another body is found. When she discovers Jeremiah has a connection with the underworld, she is pulled into a conflict that swirls around the boss’s son who’s hell-bent on revenge.

To add to the complexity of the situation, Lily learns that her victim might still be alive if it wasn’t for opportunistic Assistant District Attorney, Ibee Walters, who has a twisted vision of justice.

As Lily gets closer to finding the killer, she unravels ugly secrets that point to Ibee and Jeremiah – placing Lily’s life and her unborn child in danger.

You can order your copy HERE.

When Marguerite Ashton was in her twenties, she took up acting but realized she preferred to work behind the camera, writing crime fiction. A few years later, she married an IT Geek and settled down with her role as wife, mom, and writer. Five kids later, she founded the Crime Writer’s Panel and began working with former law enforcement investigators to create; Criminal Lines Blog, an online library for crime writers who need help with their book research.She’s a workaholic who hides in her writer’s attic, plotting out her next book and stalking Pinterest for the next avocado recipe. A member of Sisters in Crime, Marguerite grew up in Colorado, but is now happily living in Wisconsin and playing as much golf as possible.
You can connect with her on
FACEBOOK  |  TWITTER  |  WEBSITE

Detective Ariel Weeks stabbed at the small block of ice until it split into several pieces across the counter. She tossed the jagged cubes into the glass and made her client a drink.

In less than twenty-four hours, Ariel would no longer have to use the name Jasmine and keep men company to protect her cover. All she needed to do was make it through this last night and she’d be allowed to be who she was; a mom just doing her job.

After gathering evidence and recording all the data she had, it would be hard to detach. Towards the end, she’d learned things she wished weren’t true, leaving her stomach in tattered knots.

Back at home, there were two reasons Ariel would never take on another undercover assignment.

Ariel ground her teeth as the door to Cabin D opened and closed. She could feel Mikey Surace, the mob boss’s son, staring at the backless white dress she wore at his request.

The man who smiled at the sight of blood was standing behind her, breathing heavily.

Margueritte Ashton is giving away a $25 Amazon gift card!
TERMS AND CONDITIONS:

a Rafflecopter giveaway
Many thanks to Marguerite Ashton and Pump Up Your Book!

I will have a review of this book up in November, so stay tuned!