Today, I have a REVIEW as well as author Loretta Marion graciously providing a GUEST POST about why she chose Cape Cod as the setting for her new book.


Scroll down for the giveaway! 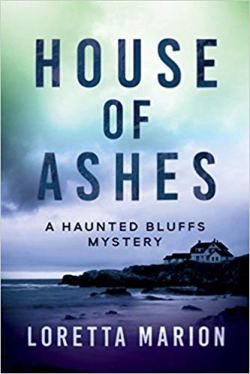 A family patriarch’s dying proclamation, an enigmatic disappearance, and a century-old curse converge in the shadows of a majestic home on Cape Cod’s craggy coast.
Thirty-seven-year-old painter Cassandra Mitchell is fourth-generation to live in the majestic Battersea Bluffs, a brooding Queen Anne home originally built by her great-grandparents, Percy and Celeste Mitchell, and still standing despite tragedies that have swept the generations.
Local lore has it that there was a curse placed on the family and the house is haunted, though opinions are divided on whether it’s by malicious or benevolent spirits. Cassie believes the latter―but
now she stands to lose her beloved home to mounting debt and the machinations of her dream-weaving ex-husband.
Salvation seems to arrive when a nomadic young couple wanders onto the property with the promise of companionship and much-needed help―until they vanish without a trace, leaving behind no clue to their identities. Cassie is devastated, but determined to discover what’s happened to the young couple…even as digging into their disappearance starts to uncover family secrets of her own. Despite warnings from her childhood friend, now the local Chief of Police―as well as an FBI agent who pushes the boundaries of professionalism―Cassie can’t help following the trail of clues (and eerie signals from the old house itself) to unravel the mystery. But can she do so before her family’s dark curse destroys everything in its path?
Click to Purchase!

Why I chose Cape Cod as the setting for HOUSE OF ASHES
The first summer my husband and I were invited to our friends’ summer cottage in Eastham on Cape Cod, I imagined it would be a fun beach getaway. However, I’d not been prepared for love at first sight. Two decades have passed since that first visit and my love affair has only intensified, especially now that I’ve chosen to set my Haunted Bluffs mystery series on the Cape.

My decision to create the fictional town of Whale Rock as the setting for HOUSE OF ASHES, was so I could spend more time on the Cape, even if only in my imaginary world of words. I was touched when one of my beta readers wrote to me and said, “I now want to live in Whale Rock.“ There are few greater compliments she could have given me, for when I created Whale Rock in my mind and in my writing, it was in hopes that readers would see it as a place they too might wish to live.
When I’m writing a story, I look upon the village itself as one of the characters and take extra care in creating the book’s setting. My hope is to give it a unique and appealing atmosphere where one could envision themselves settling in for a few hours each day as they read the story.
I must admit, it wasn’t difficult to find inspiration, for the Cape offers it up in heaps with its great natural beauty. And this humble writer is only one of a multitude of artistic types who have found their muse come alive there. In the 1800’s Henry David Thoreau described the nearby Outer Beach this way: “A man may stand there and put all America behind him.” I can’t argue with his sentiments. When I’m there I can forget about the rest of the world for a bit and readily crawl into the imaginary writer’s space in my mind.
The Outer Beach is also where naturalist writer Henry Beston claimed refuge. In the 1920’s he designed a beach cottage atop a dune overlooking the open Atlantic which he called Fo’castle because it gave him the feeling of being aboard a ship. (For the nautically disinclined, forecastle is any sailor quarters located in the forward part of a vessel.)  There Beston, one of the fathers of the modern environmental movement, gathered experiences for his book, THE OUTERMOST HOUSE, which was a motivating factor behind the preservation of the Cape Cod seashore. Fortunately, his writings influenced many conservationists: “Touch the earth, love the earth, her plains, her valleys, her hills, and her seas; rest your spirit in her solitary places. For the gifts of life are the earth’s and they are given to all…”
The Cape Cod National Seashore was established by President Kennedy as a measure to protect the increasingly popular area from over population and erosion. This national treasure encompasses nearly 40 miles of protected shoreline extending along the Atlantic-facing outer Cape, with pristine sandy beaches and dunes, salt marshes, ponds, woodlands and cliffs as evidence of the success of this preservation enactment. Beston’s Outermost House stood until 1978, when Fo’castle was claimed by the raging seas of a ferocious winter Nor’easter storm. Though the house is no longer there, it is still a must to trek out to Coast Guard Beach for the impressive views of the Atlantic and to watch for the bobbing heads of seals. The trail to the ocean winds through woodlands where one might spot a fox darting across the path and past the large glacial erratic known as Doane Rock before opening to marshes alive with wading birds, butterflies and dragonflies.

To quote Beston again, “The seas are the heart’s blood of the earth.” And indeed, what I find most enchanting is the ever-changing seascape of Cape Cod Bay. With a west facing cottage we are witness to the dramatic tidal range of the bay, transforming the vista every few moments and rewarding us with breathtaking sunsets, strikingly different between the extreme low and high tides. It also makes for interesting beach walking among the tidal flats and pools scattered about at low tide, with the ebbing waters leaving their mark in uniquely beautiful striations in the sand. It’s a shame to disrupt Mother Nature’s art with our toes, but she’ll leave yet another fingerprint in the sand at the next low tide. And as the tide rises, the rhythm of the advancing water becomes a powerfully soothing hypnotic, especially at night as the lapping waves lull us to sleep.

Unspoiled beauty, flora and fauna, a rich historic heritage—the Cape offers more than I could hope for in a tranquil beach getaway. The moment that Eastham Windmill comes into sight, my heart leaps knowing I’m just moments away from my lovely, peaceful Cape Cod writing retreat.

I received an ARC of this book from the publisher via Netgalley in exchange for anhonest and thoughtful review.

From the book’s haunting cover design to the intriguing synopsis, I was instantly captivated and could not wait to delve into this one. Now after having spent an enchanting adventure along the Cape, I cannot wait to see where this series takes me next!

From the opening chapter to the final sentence, I was completely immersed in this intensely atmospheric story made even more so by the fact that I read it during the Halloween season. It’s been quite a while since I’ve been so completely awestruck after the first chapter alone! Read it and you’ll quickly understand why it will be so hard to put down afterwards!

Generations collide in this incredibly nuanced mystery that seeks to discover the secrets behind a family’s paranormal history and the current disappearance of two missing people. The story unfolds from both past and present perspectives, which the author is able to seamlessly interweave to create a truly poignant narrative. The addition of journal entries and the sleuthing itself make this story even more multilayered and engaging. This isn’t a twisting thrill ride, but rather a slowburning untying of knots that reveals a satisfying end.

Overall, there is a little of everything for a lot of different readers to enjoy. From history and romance to mystery and the supernatural, Battersea Bluffs has so much to offer.

An author of fiction, Loretta Marion’s writing bridges the genres of mystery and suspense and women’s fiction, always with hints of romance and humor, sometimes delving into the psychological and paranormal. She creates strong but flawed and struggling characters as appealing as the rich atmospheric settings in which the stories take place.
Loretta is a true bibliophile and has loved reading and creating with words since she was a young girl. And that affection for the written word followed her like a shadow throughout her life as she put pen to paper crafting marketing and advertising copy, educational brochures, and newsletters. But her passion for writing fiction evolved from the unlikely world of hospice. As a volunteer, she set out to establish a Legacy Story program to honor and preserve the rich heritage of the fascinating people who were soon to leave this world. The meaningful experience inspired her to create her own interesting characters and stories. Her debut novel, The Fool’s Truth, was a twisty and suspenseful mystery with whispers of romance. Her newest novel, HOUSE OF ASHES – A Haunted Bluffs Mystery, is the first in a series published by Crooked Lane Books.
Though born and raised in the Midwest, Loretta fell in love with New England and has made it the setting for much of her writing. When not whipping out words on her laptop, she is traveling, enjoying outdoor pursuits, or is curled up with a delicious new book. Loretta lives in Rhode Island with her husband, Geoffrey, and their beloved Mr. Peabody, a sweet, devoted and amusing “Corgador” (Corgi-Labrador cross).
WEBSITE | FACEBOOK | PINTEREST
GIVEAWAY!